Tails from the Dark Side

Night fishing for bass is not for everybody – as a matter of fact, it’s really something that only a few will pursue. There are a lot of things that can make a fisherman uncomfortable out there in the dark, when it’s very quiet, a little eerie. Then the silence is suddenly broken with a huge splash, as if someone fell into the water. For a chaotic few seconds your rod is doubled over, and the drag is starting to slip as your heart skips several beats. You hear the wallowing, the splashing of what must be an enormous bass going ballistic just a few feet away, crazy bursts of power and water and spray. Then, like the suddenness at which it all started, it’s over. It’s all quiet once again. Your bass is gone, your line is limp, your spirit crushed. But – BUT – the night is not over. As a matter of fact, it’s just beginning.

Welcome to the world of nighttime bass fishing, a place where dreams both come true and are crushed. Where big bass are caught, but more are lost. A place of darkness, bats, mosquitos, and snakes. Yes, snakes! Sometimes there are things that startle you, noises that are made close by, maybe a little too close. You might slip and fall, maybe get wet. If you’re in a canoe or kayak you may strain your eyes to make out what it is that appears to be swimming straight at you in the blurred darkness.

Twenty minutes later, as your *buzz-bait gurgles back to your rod tip, you can just barely make out the form of something, something, bulging the water right behind it. Then, with lightning quickness, that “thing” crushes your lure and it is once again toe-to-toe mayhem as a showering spray of water soaks your arms and face. This time, however, the fish is hooked well, and it’s big. Your rod stays bent as the fish circles your kayak, towing it as he swims. Finally the bass shows signs of fatigue and is listing on the surface. You cradle the fish in your hand, scooping him up from the inky surface into your lap, ignoring the chill of the water. 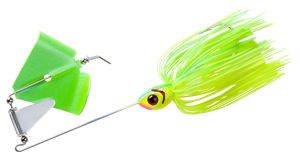 *buzz-bait \ˈbʌzˌbeɪt\
noun. a fishing lure with small blades that stir the water.
Noise-making surface-disturbers like buzz-baits, which help the fish home in on your offering even as it moves, are an excellent choice for fishing in the darkness.

It’s a beauty, nearly six pounds, and fat as a butterball turkey. As you struggle to take a quick selfie or two, the fish shows its disapproval with some hearty headshakes. This bass doesn’t like it one bit. Plus, they can’t breathe out of water. Feverishly, you unhook, photograph and then release the fish. Your nerves are a little shot. Still shaking, you sit motionless for several long minutes to try and calm down. Once again, it is quiet.

Eventually, you paddle over to a small cove, just an indent in the shoreline, and turn your *headlamp on away from the water you hope to fish. An inspection of knots, line, and gear is in order. A lot can happen in the dark that we don’t always know about. Somehow, some way, your braid got entangled amid just about everything in the yak. You ask yourself… “do I try to untangle this mess in the dark?” Or… “would it be better to wrap it all up, put it in the rod holder and grab the spinning stick?” Time is of essence, so you make the decision to switch up with the spinning rod. Hmmm… only 20-pound braid on this outfit. Do I work the pads and the wood, where I know there are bass? Might I lose them on the lighter gear? You know that the buzz frog and its crazy plastic legs will catch bass in open water as well, but it’s got a better shot at a big fish up in the pads. You’ve made your decision… you’re going in. 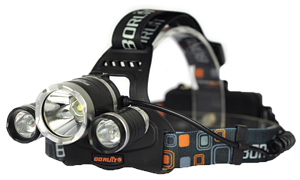 *headlamp  \ ˈhed-ˌlamp \
noun. a light worn on the forehead.
Headlamps are an imperative piece of gear – you can’t tie a knot with a flashlight in your hand. Check out the Boruit headlamp we reviewed in the Hot New Gear section of our February 2018 edition; it’s the best of its kind that we’ve seen yet.

Almost immediately you get bit, but the fish, or maybe it’s the fisherman, just aren’t in tune. You *miss several strikes and land a few dinks and assess it to the actions of smaller bass, knowing all the while that you shouldn’t have set the hook just because surface splashes have you in “hair-trigger” mode. Man, there’s a lot of fish up along this shoreline, and you want to at least catch a few of them. You decide to make shorter casts to a few known nooks and crannies that you scouted earlier during the day.

*Wait until you actually feel the weight of the fish, rather than setting hooks because you hear splashing. In the darkness, you’ll miss a lot of strikes if you’re on a hair trigger.

Just around the tall grass along the shoreline there’s a fencerow. The slight crescent of a moon is just barely enough light to recognize it, with several posts protruding from the surface. Again it is quiet, almost scary. Hoping for something of an accurate cast, you let the frog fly and hear it plop down close to the shallowest post of the fence. After several turns of the reel handle you figure that your frog is out of the strike zone, so you hustle it in and make another cast. But this one is far from perfect, landing on the opposite side of the fence and draping over a strand of ancient barbed-wire. Ohhhhh boy – now what?

As you ease the frog up to the fence you cipher on “snapping” it over the strand with a quick, upward snap of the wrist. But it’s dark, and the crescent moon and distant parking lot light offers little visibility. As you reel slowly to the fence anticipating the snap, something big and bad explodes on your lure. Aww, no! You’ve got a big fish on, on the other side of the fence!

The next 20 seconds are chaotic and crazy. No bass fisherman should have to go through this, but you endure to your best. Keeping a tight line, you hear the wallows, feel the power, and envision the size of the bass that is going psycho as it’s being hung from the fence wire at the end of your line. Big sloshes, crazy gyrations, and water going everywhere. You know that nothing good can come from this. You hold on for a few more seconds, then the fish is gone, the line is limp, and all is quiet.