Whether it’s winter, spring, summer, or fall it is always a good time to go fishing for crappie. This freshwater panfish comes in two flavors: black crappie and white crappie, although they look very similar and both have a reputation for being fine tasting fish due to their flaky, white flesh. They are fun to fish for sport and food year-round, can even be caught when ice fishing, and aren't too hard to catch regardless of the season. For beginners who can’t wait to begin their fishing adventures, crappie are a great way to start.

What are Crappie Fish?

Crappie belong to the Centrarchidae family (sunfish). Crappie are a widespread species found widely across the 50 states of America; although their origin is unclear, it is believed that they are native to the eastern United States. They are also known by many other names: papermouths, strawberry bass, speckled bass, specks, speckled perch (deep breath) white perch, crappie bass, and finally calico bass. Regardless of whether they’re black or white, both are a similar shape and size. Black and white crappie both have a deep and laterally compressed body and are normally silver-grey to green. As the term “panfish” suggests, crappie are typically small enough to fit in a round pan with an average length of four to eight inches.

Fun fact: although crappie are typically small, they can get much bigger depending on how long they live and the largest recorded crappie fish was 19.3 inches long.

Just how big a crappie would you have to catch to set a record? Here are the biggest yet recorded, from the Mid-Atlantic region:

Unlike saltwater fish, Crappie are trapped in the lakes and ponds they inhabit (excepting those found in the tidal tributaries of the Chesapeake Bay, of course), so there is no migratory pattern to keep track of and open season for crappie is year-round in most states. That’s right, you can catch crappie anytime, during any season, in almost any state including all of DelMarVa. Crappie’s year-round seasonal availability is why they are actually one of the few fish that are perfect for fishing in the Mid-Atlantic year-round.

Each season has its pros and cons, but the general consensus is that the best and easiest time to catch crappie is spawning season. For the Mid-Atlantic region spawning season starts when the water temperature hits the low 60s. This is when schools of crappie move close to the shore, making them easier to catch. However, keep in mind that at times early season may be difficult to fish for crappie because they are on the move.

Moving into summer as well as in the fall months, crappie can be found—often in large schools—both near shorelines and in mid-lake areas. As fall turns into winter they may move to deeper areas to find warm water. At this time of year, finding deep structure like bridge pilings can be a key to success.

As a fish that spans across the country with a population that is more than plentiful, regulations on fishing for crappie are not as strict as those for other species in most cases. Many states don’t even have minimum size limits, though many do have daily creel limits. For more information on crappie regulations by state, visit these websites for:

How to Catch Crappie

Where to Find Crappie

Crappie are a structure-oriented fish, so when fishing for crappie, always look for submerged objects like fallen trees, logs, or reefs. Finding the right spot to fish for crappie is key because they swim in schools and will stay in very specific areas where they may not budge from. Don’t be disheartened if you wait around a log that looked like the perfect spot and find nothing, just keep it moving and look for more structure and there’s a high chance you will find your hot spot. And keep what we mentioned before about seasonality in mind; during the warm months fallen trees laying out into the water have a lot of potential, but once a chill sets in the crappie are likely to move deeper and structure that reaches down into the depth, like bridge pilings, become more likely spots. Be sure to check out How to Slingshot Christmas Crappie to see an effective technique for bridge fishing for crappie.

Read Eastern Shore Millponds: Fantastic Freshwater Fishing for a detailed map with all the best locations to fish for crappie in the eastern shore millponds complete with experienced advice on the best techniques to use in each area (hint: pay attention to Unicorn lake, Tuckahoe, Wye Mills Pond, and the Salisbury millponds).

And if you don’t have a boat, try reading Shoreline Sharpies: Tips for Fishing from Shore, by Eric Packard. This article will answer your questions about how to fish for crappie from the shore.

Here’s a tip that always applies to crappie: they are almost always most active during dawn or dusk, when they move into open water or along the shore in order to feed.

When attaching live bait, make sure the hook is the correct size. If it’s too small the fish will get off of it. But if it’s too large, the fish will not be able to bite it in the first place. Most of the time a number-six hook is about right for crappie.

Every angler has their own preference for gear, but for beginners, this gear should be a safe bet:

Okay - now are you excited to go out and try catching some crappie? You sure should be!

Here's a video we made during a Facebook Live presentation on how to catch crappie, for more info:

Be sure to check out our entire Fishing For Beginners series covering a number of popular Mid-Atlantic species. 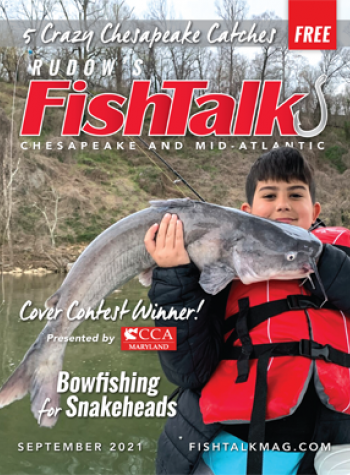