Light tackle anglers, rejoice – you can still get a cool new bay boat 100-percent rigged and ready for under $50,000. No, these won’t be the biggest nor the fanciest boats in the world. Yes, the published prices are apt to rise a bit when you include things like taxes (though in all these cases you’ll still have no problem hitching up and towing away under that 50K mark). But all three of these choices are well-built, well-equipped fishing machines that will get you into the game for about as much money as you’ll spend on your tow vehicle.

Included in the Price Tag: A Yamaha F150 outboard, a single-axel aluminum trailer with swing-away tongue and brakes, a 15-gallon livewell, a 45-gallon fishbox, a 70-quart reversible helm seat cooler, bow trolling motor pre-wiring, six vertical rodholders in the console, and two flush-mounts in the gunwales.

We Wish It Had: A bit more livewell capacity.

We Love That: The forward stowage compartments under the bow seats pop up on gas-assist struts, and hatches are RTM molded so they’re fully-finished on all surfaces.

Visit Robalo Boats, to learn more. If you're interested in a larger version, see our Robalo Cayman 246 Boat Review.

We Wish It Had: A standard raw water washdown, which we’d expect at this price-point.

We Love That: There’s a Yeti under the leaning post. 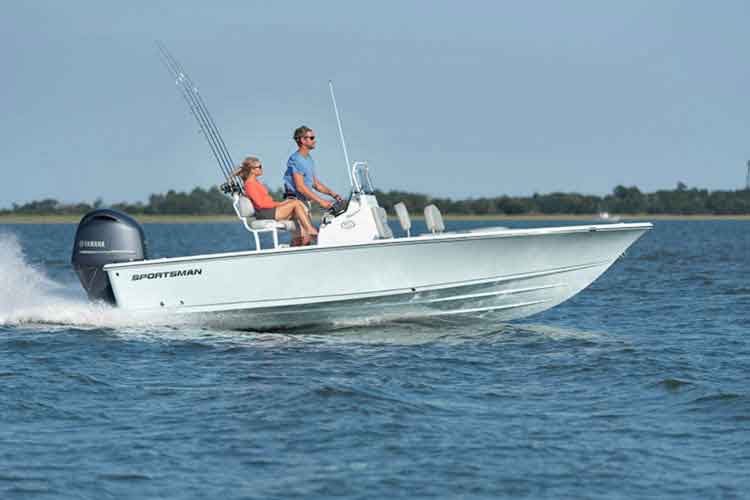 Included in the Price Tag: A Yamaha F150, a pair of 20-gallon livewells aft plus a third 10-gallon well forward, a bow casting deck with an integrated fishbox, a nine-inch Garmin GPSMAP 942xs, a leaning post with flip-up bolsters, bow trolling motor pre-wiring, six vertical rodholders in the console, and two flush-mounts in the gunwales.

We Wish It Had: The vertical console rodracks integrated into the console itself, rather than being add-ons.

We Love That: The electronics systems are integrated via Sportsman’s SportLink system, which also adds a three-year warranty to the Garmin and JL Audio components. And hey, three livewells totaling 50 gallons of capacity on a 20-footer?! You’ve gotta love it.

Also be sure to see: