A combo of not-so-great weather and fishing has been keeping many anglers away from the water, understandably. We did touch base, however, with a few guys who managed to make it out on the Magothy and Severn this week searching for pickerel and perch. The pickerel bite was iffy, with fish generally being caught but not in large numbers. Angler’s commented that catching more than a couple was a “good morning” right now. Pickerel have been taking soft plastics, as well as minnow. We’re hoping that in the near future the bite will pick up in the rivers — aside from targeting them there, traveling to the Eastern Shore mill ponds has been an option. If you’re planning on heading that way though, access has been questionable. Although some of the ice skims were knocked off this week, some areas are still inaccessible and each morning is a bit different.

Perch are around in creeks and coves, but not in great numbers (yet!!). We heard the first reports of them this week, with Alltackle mentioning that they heard from a couple anglers who managed to find pockets of them. We’ve had positive reports from anglers who fished for them in the Tuckahoe, as well. Minnows under a bobber were the favorite.

Winter time isn’t generally when Upper Bay fishing is hot, but it does provide us with an excellent opportunity to explore the nooks and crannies of our local tributaries in search of pickerel. With little happening elsewhere, anglers are slow-trolling minnow and casting spinners into the shallows. Angler’s reported that both of these are effective methods for hooking them up. Although ice skim (more so slush and ice chunks) has been an issue in some areas, generally, if you’re daring enough to safely brave the conditions, you can find an area to fish.

With the current weather so cold and blustery, there hasn’t been a whole lot of fishing going on in the Upper Bay. Hostile conditions are keeping anglers off the main stem, and where rivers and creeks aren’t solid or slushy, they’ve been the primary target for those still insisting on getting their fishing time in. In the Magothy, the pickerel bite upriver remains steady when you can find pockets where the fish are. Some upper cove areas where the water doesn’t move much and there’s shelter from the wind froze up this week, so some locations may be limited than usual, but as of this morning we were able to verify with on-site observations that larger creek arms and relatively open areas were ice-free.

Angler’s recommended using live minnows under a bobber, or casting and slowly retrieving a three-inch paddletail. On the Eastern Shore, crappie are available as well. The Tuckahoe and upper Choptank were providing some action, with live minnows the most popular option. Yellow perch are also present in some areas.

Welcome to 2022 anglers! As the new year cranks up we have plenty of fishing opportunities despite the chill in the air, and the yellow perch bite in the creeks has improved as changes in the weather have pushed the fish into more of a winterish mode. Angler’s mentioned that minnow under a bobber and Gulp! minnow are tempting they yellow perch to bite, and minnow, jerkbaits, and paddletails are all producing pickerel in the Magothy and the Patapsco. Contributor Eric Packard hit the Magothy post-storm for a couple of hours, and reports that upriver of Beechwood was skimmed over with ice. Still, he did manage to find a largemouth bass willing to hit a chatterbait. We also had a reader report from Bodkin creek this week that pickerel are hitting white and chartreuse swimbaits fished around the docks. 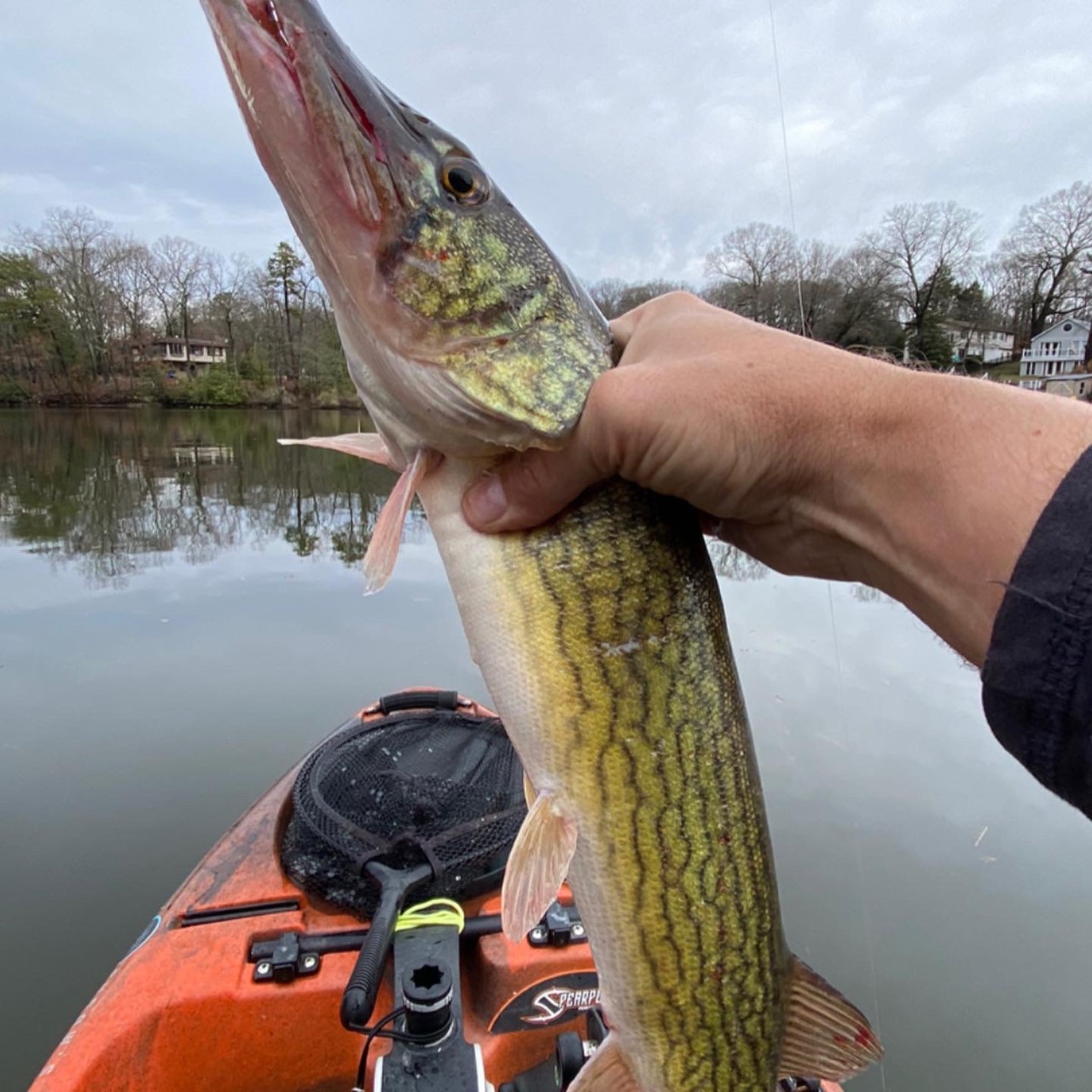 Anglers hoping to catch and release stripers were finding some fish up into the 30-inch class around the Chesapeake Bay Bridge pilings prior to the unsettled weather, jigging BKDs and paddle-tails down deep on heavy leadheads. However, with the larger fish showing up off the coast and down south, many anglers who have the itch to catch and release have been travelling to hook into the trophies.