Everyone’s surely looking forward to being able to catch rockfish once again starting August first. Until then most area anglers are targeting white perch. In the heat of the day they’re being found on deeper shoals including Belvidere, alongside some spot. Chesapeake Sabikis tipped with lugworms or bottom rigs have been the mainstay. In the tribs, the action is mostly limited to daybreak, sunset, and shaded pockets of water with structure.

Angler’s is reporting that some snapper blues have now showed up as far north as the Bay Bridges, though most of the churning water will be found a bit farther south. They also mentioned that some anglers dropping cut bait to the bottom in the tribs have been hooking up some catfish including some upwards of 10 pounds.

Several readers report that perch fishing in the rivers has been surprisingly tough in the shallows, and anglers heading for deeper waters are doing better. Areas like Seven Foot Knoll and Belvidere Shoals have been holding plenty, too, and dropping Chesapeake Sabikis tipped with bloodworm, lugworm, or Fishbites bloodworm flavor has been very productive.

Tochterman’s checked in to let us know that the Key Bridge area has also been producing plenty of perch throughout the day. Anglers in the area have found success casting around the pilings and nearby structure with Perch Pounders and Beetle Spins, or dropping bottom rigs into slightly deeper water. During the hottest hours of the day, fish are generally moving towards pockets of cooler water settled near bottom.

While some anglers have become perch-pillagers during striper closure, others are deciding to target the cats. Clyde’s reported that just north of the Bay Bridge, multiple boats reported catching large catfish with cut baits on the bottom. While other species of fish can be finicky throughout the day, cats are showing no signs of slowing down.

Crabbing Report: Clyde’s heard of some solid crabbing this week for anglers using fowl necks. One crabber reported good catches in the Severn in about six to eight feet of water.

STRIPER ALERT: as of the publishing of this report on July 16th, striped bass fishing will be closed in Maryland through the end of the month. This includes targeting them for catch and release fishing. We have received many reader requests for more detailed information about the closure, such as specific lures or tactics that may or may not be used, but we can’t expand beyond the DNR’s latest guidance and unfortunately have no further information on how the state will determine enforcement of the regulations. The best we can do is to suggest taking all reasonable measures to comply with the law while enjoying your pursuit of other species.

Big Worm crewmember Max Rudow reports that they’ve been running north up the Bay and experiencing an interesting mix of rockfish and big catfish, with catfish occasionally out-competing the rockfish to eat their live spot. Though the mass school in the Hodges/Tolchester zone has disseminated that area had remained a hotspot along with the Poole’s lumps and lower Patapsco. Multiple readers checked in this week to let us know that the fish were up there; we'll have to see if they stick around until becoming fair game once again.

Tochterman’s and Alltackle let us know much of the same— rockfish are in the Hodges/Tolchester Zone, and they suggested honing in on the catfish until next month, while stripers are off limits. Catfish are popping up all over the Upper Bay, with less regard for area than the stripers. From the reports we’ve been hearing, the catfish population is far more spread out than stripers. Angler’s in Annapolis let us know that there were some hefty catches from shore this week, with cats peaking in the mid-to-upper 30s. Cut bunker, gizzard shad, or chicken liver has been prime choice for the catfish.

Tochterman’s mentioned that the Key Bridge also has an okay white perch bite going. They’ve been hanging around structure and shaded areas, escaping the oppressive summer heat. Bottom rigs with bloodworms (when available), grass shrimp, worms, or FishBites are tempting them.

With stripers in relatively short supply once you get away from the (crowded) Patapsco and Poole's/Tolchester/Hodges zones, many anglers in other areas (and those who don’t enjoy fishing in the fleet) have been looking for perch. However, we heard reports from several readers which were seconded by the Angler in Chief that casting to the docks and rip-rap in the tribs has been a bit slower than expected. Yes, perch are around, but not in the hoped-for numbers. Casting Perch Pounders in white has been doing the best. Tochterman’s reported that there is a strong perch bite going on just south of the Key Bridge and at Man-O-War Shoal, though. As usual, bottom rigs are the go-to in those open waters. Perch Pounders are also working. There’s also a schoolie bite from the Key Bridge down to the mouth of the Patapsco. Around the Key Bridge itself, most of the striper action came for jiggers and liveliners and there are some keepers caught by anglers who stayed at ‘em. Around the mouth of the river, trollers were common this week and also managed to wrangle some keepers up. Trollers are also having some success among the multitude of live-liners hitting the Poole’s Island lumps, Tolchester, and Hodges.

Spot are pretty much everywhere at this point — everywhere — in eight to 20 feet of water on live bottom. Just north and just south of the Bridges on the west side has been a good bet. The continuing shortage of bloodworms has led many anglers to shift to lugworms, which have been productive fished on bottom rigs or Chesapeake Sabikis. Fishbites are also doing the trick. Some croaker are also mixed in, though we didn’t hear about any more big ones this week.

Snakeheads are a popular target right now in the Middle River, Busch River, and the Gunpowder. The bite in the backs of these areas has been absolutely on point. Topwater frogs, crankbaits, and poppers are happenin’ for the snakehead. Speaking of snakehead— Tochterman’s let us know of an awesome opportunity for kayaking and boating anglers to go fishing while helping clean the Bay of invasive species… and to win some cash! The first-annual Snakehead Bash is being held on August 14th, 2021 at Flying Point Park in Edgewood, Maryland. While there is a payout for the tournament, the snakeheads caught must be turned in dead and the DNR will examine the stomach contents of the presented fish. This will give the DNR a chance to perform their fisheries science magic that benefits recreational anglers fishing the Chesapeake, given that the snakes feed on our most beloved species including largemouth bass and white perch. Additionally, proceeds from the tournament will be used to acquire DNR-approved largemouth bass, which will then be used to restock the Middle River. Here’re the double-double bonuses: there’s a $1,000 prize for first place kayak angler and a $2,000 prize for first place boat. Almost better? They’ll have a chef on hand to prepare these delicious invasives. Entries are limited and must be in by August 1, so act fast if you want in.

Tochterman’s says stripers have been trending closer to the eastern shore and hanging in around 20 feet of water. They continue to show a preference for live spot, although some anglers are catching them jigging six-inch white BKDs. Those using bait of any sort are also encountering catfish just about wherever they drop their lines. The lumps off Pooles Island and the Tolchester area have been good spots and overall, the Upper Bay continues to hold more rockfish - and more boats - than any other one portion of the Chesapeake. The Key Bridge has small stripers and perch around it, and we’ve also had some reader reports that stripers have been intermittently breaking water north of the bridge up towards Ft. McHenry.

Fishbones backs up the notion that the bite is dominated by liveliners, but says the fleet seems to have scattered from Tolchester as the stripers have spread out some. Following channel edges is generally good. Snakeheads are all over and turned on in pretty much all the creeks and upper tribs, but no specific isolated areas have popped up as hotspots. 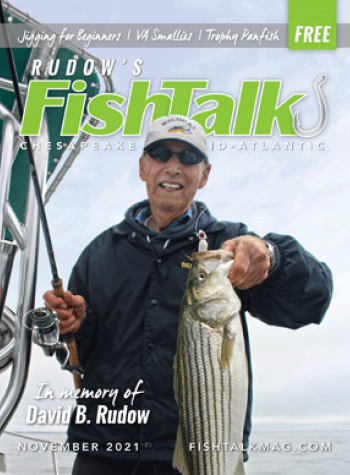